This is a truly adventurous expedition into the depths of Arctic Siberia's Yamal-Nenets Autonomous Region. Guests will travel over 1000km across the region, visiting three encampments of nomadic Nenets reindeer herders. Travel will be both on zimniki ( temporary winter roads) and completely off-road. Each encampment will be in a very different area. The first is in the spectacular Polar Ural Mountains. The second is near the region's largest muskox herds, which we will have time to visit and photograph. The third encampment is near Yamal's best-preserved gulag camps and will have several thousand reindeer. This trip is ideal for those who do not want to spend a long time at one particular nomad camp and prefer to see everything the region has to offer in as short a time as possible.

Fly into Salekhard. Transfer one hour by minibus to Kharp, from where we catch a 1.5 hour train through the Polar Ural Mountains to the abandoned village of Polyarniy. After a quick exploration of the village we get into walled wooden box sledges attached to the backs of snowmobiles and drive up into the mountains to an encampment of nomadic reindeer herders.

These nomads are among the most traditional tribal people in the world, and have the longest nomadic migration routes in the world. They wear clothing made of reindeer fur, sewn using reindeer sinew as thread, and live in conical teepees made of reindeer fur and known as chums. They migrate up to 2000km every year, transporting their chums and all their possessions on home-made, wooden, reindeer-drawn sledges. They speak a language completely unrelated to Russian and sacrifice reindeer to the gods of an ancient shamanistic religion.

Overnight with a family in their chum.

Live with the nomads. There will be no fixed itinerary for these days. Guests will merely observe and take part in the daily lives of the nomads and immerse themselves in this ancient culture. Daily life could include herding reindeer, lassoing reindeer with reindeer rawhide lassoes, slaughtering reindeer then eating the raw meat and drinking the blood (the Nenets favourite meal), cutting trees for firewood, collecting ice or snow for water, making new sledges, sewing fur clothing, and so on.

Snowmobile back to Polyarniy and take the train to Labytnangi (a town 20km from Salekhard on the opposite bank of the River Ob). Overnight in hotel.

Our 6-wheeler Trekol all-terrain vehicles pick us up from the hotel. We travel north for around seven hours until we reach an encampment of nomadic Nenets reindeer herders camped in the area of Yamal’s largest muskox herds. Overnight in a chum with a nomadic family.

While staying at this encampment we will divide our time between visiting the muskox herd and immersing ourselves in the daily life of the Nenets.

Drive back to Salekhard in our Trekol all-terrain vehicle.

Drive east on a zimnik (temporary winter road). While most of Russia has no roads, towns and villages become accessible in winter thanks to a huge network of zimniki – temporary winter roads built on the frozen surfaces of rivers or just using compacted snow and ice. The Nadym zimnik is particularly interesting as it runs parallel to the 501 Salekhard-Igarka Railway of Death, a 1500km railway that Stalin tried to build along the Arctic Circle using prisoners of gulag concentration camps for labour. It was abandoned after his death but in many places the tracks remain, as do plenty of bridges and the gulag camps where the prisoners lived. Some have around 20 – 30 wooden houses still standing as well as watchtowers and barbed wire fences.

After five hours we will stop at one of the largest camps (around 20 wooden buildings that can be explored). One of them has been renovated by a hermit called Uncle Vasya who lives here by hunting, fishing and picking berries and mushrooms. We will have lunch here and anyone who wants can visit Uncle Vasya for a glass of vodka and some semi-coherent stories about his past.

After lunch we continue east, all the way passing more gulag remains including camps, watch towers, barbed wire fences, railway tracks and bridges. After another five hours we reach Nadym, one of the largest towns in eastern Yamal, and overnight in a hotel.

Day 10: Travel to large Nenets camp in the forest tundra

Travel through the vast, empty tundra to an encampment of nomadic Nenets reindeer herders. While the previous two camps were in the mountains and the tundra, this camp will be located in the forest tundra, which is the border zone between taiga and tundra. There are patches of stunted forest cover and patches of empty tundra. The camps in this area have the biggest reindeer herds in Yamal, or even the world. They therefore also migrate the most often (2 – 4 times a week on average and up to 2000km a year). We will visit a nomad camp with between 3,000 and 7,000 reindeer. Many are also camped near gulag remains, which we may also have the opportunity to explore in more depth. Overnight with nomadic family in their chum.

On these days we will immerse ourselves in the daily life of the camp, visit the herd of thousands of reindeer and explore any nearby gulag camps in the beautiful forest tundra.

Return to Nadym and overnight in a hotel.

Spare day in Nadym in case a blizzard prevented us from returning on the previous day. This is necessary to make sure we do not miss our flights home.

Take an early morning flight from Nadym to Moscow and on to your home country. 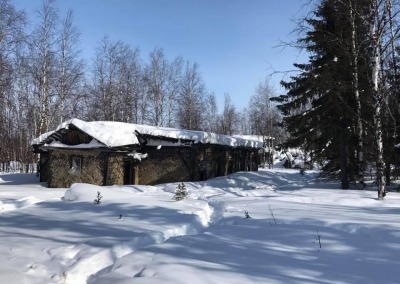 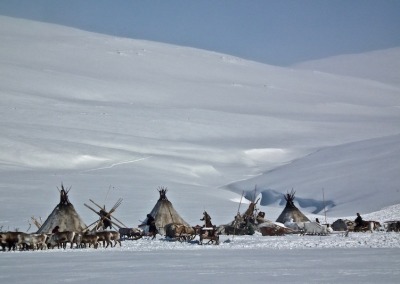 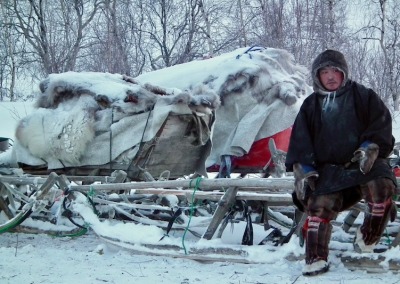 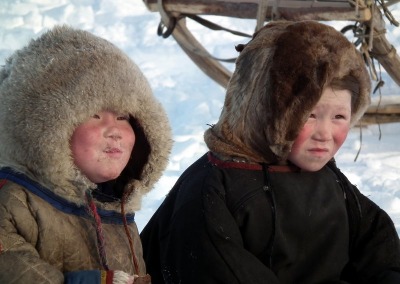 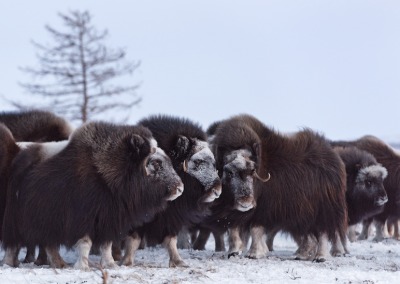 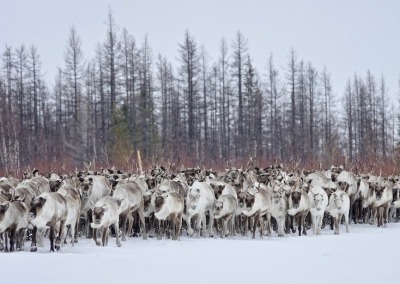