This trip concentrates on the three northeasternmost districts of Archangel Province: Pinega, Mezen and Leshukonskoye. This area was the traditional northeastern boundary of medieval Russia, before it expanded east into Siberia. Just to the east is the Kanin Peninsula, the westernmost boundary of the territory of the nomadic Nenets reindeer herders. Nenets territory stretches 2000km across the Arctic from the Taymyr Peninsula in the east to the Kanin Peninsula in the west. The Nenets from the Yamal Peninsula, roughly in the centre of the trritory, are the most famous. For over a thousand years, Nenets and Russians traded at annual fairs in this part of Archangel Province. The local Russians here are known as Pomors. They are the descendents of people who fled serfdom in central Russia during the Middle Ages. Their dialect, clothing and spiritual beliefs differ somewhat from more southern Russians, and have often been affected by those of indigenous Arctic peoples. The area is special because it is the only place in Russia where you can experience ancient northern Russian (Pomor) culture and Nenets culture in one place. On the Yamal Peninsula there is no Pomor culture, as there were never any Russians there until a few hundred years ago. In Archangel Province, on the other hand, most villages are made up of traditional log cabins. There are spectacular examples of traditional wooden churches, windmills, houses and wells, which elsewhere in Russia you can only see in open-air museums. People still use horse sledge in many villages. Just as the Yamal Nenets migrate off their peninsula to spend winter in the forest tundra of Nadym District, so the Kanin Nenets migrate off the Kanin Peninsula to spend winter in the forest tundra of Mezen and Pinega Districts. If you come in late January, you may be lucky enough to join them on their migration, including the epic crossing of the River Mezen.

Fly into Archangel (Arkhangelsk). Drive one hour to a husky breeding farm. Meet the dogs and go for a 3km sled ride through the forest and over the surface of a frozen lake. Afterwards, continue to Golubino village in Pinega District. Overnight in hotel. This transfer can also be made into a 2-day 120km cross-country dog sledding expedition at extra cost. Please get in contact for details.

This whole area is built on labyrinths of caves. Today we explore the underground cave networks, full of ice stalagmites and stalactites. We also go for hikes through the spectacular forest and karst scenery of Pinega District, visit an unfreezing waterfall, karst gorges and an abandoned monastery on a hill with spectacular views over the River Pinega. Overnight in Golubino.

Travel on to Mezen District, the final frontier of Archangel Province before Nenets territory begins. Visit the beautiful Pomor village of Kimzha, whose centrepiece is a huge 18th-century wooden church. There are also many traditional Pomor houses over 100 years old, two traditional wooden windmills and a traditional “crane” well. After Kimzha we head on to Lampozhnya village, situated on an island and usually inaccessible by car. For centuries, the Lampozhnya island was the site of an annual winter fair at which the Pomors traded with the Nenets. Traders even came from as far away as Britain.

Horse sled taxis come to meet us outside the village and take us the last few kilometres. After a late lunch we explore the village, meet the locals and visit the local horse breeders. Overnight in a simple guest house.

Day 4: To the Nenets

Drive by car to Mezen town. Although it is called a “town” and is the district centre, it has a population of only 3,000 and is built almost entirely of wood. Here we meet our Nenets hosts and travel with them on sledges attached to the backs of their snowmobiles until we reach their nomadic encampment.

These Nenets are from the Kanin Peninsula, the westernmost extent of Nenets territory. In late January, they migrate southwest off the peninsula and into the forest tundra of Mezen District. They stay there without migrating until mid-April, when they start moving back north towards the Kanin Peninsula. If you visit them in late January or mid-April, you have a good chance of joining them on their migration. A particularly spectacular event to witness is their crossing of the River Mezen. They do this quite near its mouth on the White Sea, so it is about 5 km wide and covered in ice hummocks often taller than a person. Seeing the sledge caravans and thousands of reindeer threading their way between these ice hummocks is an unforgettable sight.

Please note: unlike the Nenets of the Yamal Peninsula, the Kanin Peninsula Nenets do not live in chums (reindeer-fur teepees). Instead, they live in large home-made tents: thick sheets of canvas on a wooden frame.

Overnight in a tent with a Nenets family.

Day 5: Live with the Nenets

Immerse ourselves in the daily life of the camp, whether that be migrating, herding reindeer, cutting trees for firewood, collecting snow and ice for water, etc.

Return to Mezen in the evening, possibly via Dolgoshchelye or Kamenka villages, depending on exactly where the Nenets are camped when we visit. Overnight in hotel.

Drive south to Leshukonskoye village. On the way, we pass many quaint and remote villages with wooden churches, “crane” wells, windmills, traditional houses and spectacular views over the River Mezen. In many of them you still see people using horse sleds for transport. Overnight in guest house in Leshukonskoye.

Walking tour of Leshukonskoye. Unlike Mezen District, which has very low river banks, Leshukonskoye is set on very high banks above the River Mezen and as such has some spectacular view points. It also has a very quaint wooden chapel in the village graveyard.

Overnight in guest house in Leshukonskoye.

Day 9: To the Komi Republic

Drive south through dense taiga forest and cross the border between Archangel Province and the Komi Republic, which is inhabited by the indigenous Komi people, who have their own language. Pass lots of isolated villages with wooden houses, chapels, wells and horse sledges. In the evening we arrive in Usogorsk town and take an overnight train to Syktyvkar, capital of the Komi Republic.

Upon arrival in Syktyvkar, we transfer from the train station to the airport and fly home. 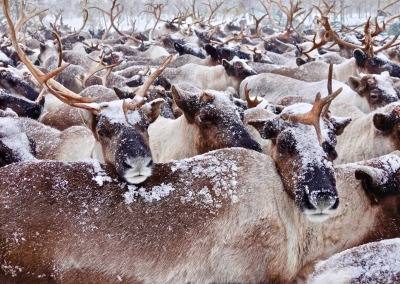 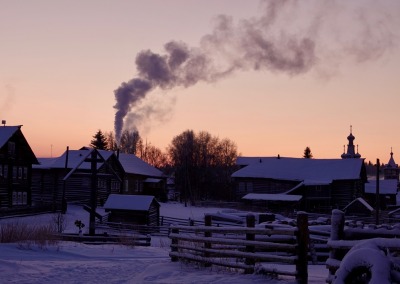 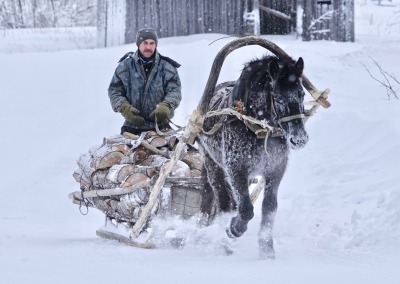 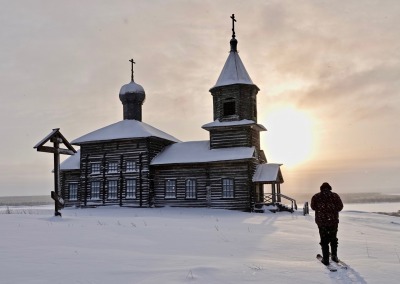 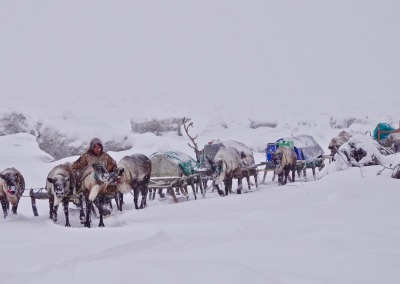 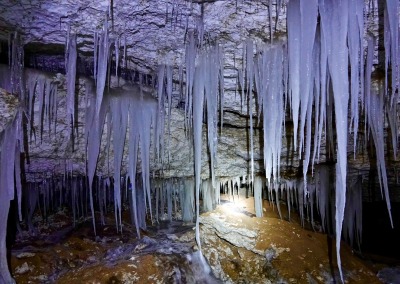