This tour takes guests to the Taymyr Peninsula, the northernmost mainland part of Russia, Eurasia or of any continental landmass in the world. Groups will travel to Cape Tsvetkova, roughly 1000km north of the Arctic Circle, and many thousands of kilometers from the nearest roads or railways. The first organised tour to this part of the peninsula was run by us in 2017. Before that only a handful of scientific expeditions had visited the area. During the trip, we will see enormous walrus rookeries and have extremely high chances of seeing polar bears. In addition, we will visit some of Yakutia's Arctic Ocean islands, where there is a colony of over 1 million birds. We will may also see parts of a 1-million head reindeer herd migrating across the Khatanga River, muskox, brown bears, seals, white beluga whales, lemmings, Arctic fox, snowy owls, indigenous reindeer herders, hunters, fishermen and mammoth tusk hunters.

Fly in to Krasnoyarsk. Afternoon city tour. Overnight in hotel.

Group flies 4 hours north from Krasnoyarsk to Khatanga, population 2,500, a village 700km north of the Arctic Circle. Visit local ethnographical museum and underground museum hacked into the permafrost itself, where remains of locally found mammoths are preserved. Note: if the museum owner happens to be away on holiday during our tour, it will not be possible to visit it, as he refuses to leave the keys with locals.

Excursion around the village. At this time of year, the world’s largest reindeer herd (over 1 million animals) is migrating right past Khatanga. Reindeer can be seen right outside the village swimming across the Khatanga River, and often even running through the village itself.

Day 3: By ship north to the Taymyr Peninsula

Group travels north down the river towards Cape Tsvetkova. Our boat has 16 beds for guests. It is an ocean-class boat but will still be heavily affected if there is ice around the mouth of the river. For this reason, the second half of August and first half of September are really the golden window of opportunity for this trip. The ice will have disappeared but the stormy weather that characterizes September will not yet have begun.

The ice retreating, as well as making access easier for the ship, also means that the walrus colonies move off the ice and onto sand spits extending from the mainland. We know the locations of the sand spits where these walrus colonies form every year. They will of course be among our prime destinations. And, of course, when there is a walrus colony, there will also be polar bears nearby, living and sleeping within a few hundred metres of the walrus colony and feeding on them when hungry.

The other advantage of doing the trip in the second half of August or first half of September is that the migration of the world’s largest reindeer herd (1 million head) is crossing the Khatanga River at this time. So while sailing north up the river to Tsvetkova Point we will very likely see many groups of reindeer swimming across the river in front of and behind our boat and running along the river banks.

On the way, we will also pass extremely isolated indigenous Dolgan villages such as Novorybnaya and Syndassko (the second most northern settlement in Eurasia). We can stop to visit them if desired. The inhabitants live by reindeer herding, hunting wild reindeer, fishing and hunting for woolly mammoth tusks.

Group arrives at Cape Tsvetkova. When the ice retreats, a large walrus colony forms on the sand spit here every year. Several polar bears live next to the colony, killing walrus whenever they get hungry.

We will take a motorboat from our ship to the sand spit to photograph the walrus. We can get to within about ten metres of them. If there are polar bears nearby, we will attempt to photograph them from the boat. If this is not possible, we will disembark and approach them gradually but will not move far away from the motorboat. If they start showing us too much attention, we will retreat to the boat. We will be with two armed, trained, experienced biologists all the time.

Hike or travel in motorized dingy along Tsvetkova Point to observe walrus, polar bears, muskox and a large number of bird species such as black-throated loon, various ducks and eider.

Hike or travel in motorized dingy along Cape Tsvetkova to observe walrus, polar bears, muskox and a large number of bird species such as black-throated loon, various ducks and eider.

Sometimes, particularly in the evening, dozens or even hundreds of the walrus will swim up to the boat, as interested in us as we are in them. This provides an excellent opportunity to photograph them close up in the water.

Trip to a nearby UNESCO World Heritage site with high cliffs, glacial cirques and buttes sticking out into the sea. Chance of seeing birds, polar bears, arctic fox, lemmings, snowy owls and muskox.

Day 8: To the Yakutian islands

Today we cross the border from Taymyr to Yakutia (the coldest inhabited part of the world) and visit Preobrazheniya Island (Transfiguration Island) in the Laptev Sea. On the island’s high cliffs, over 1 million birds can be seen nesting. There are many species of gulls, including the very rare Sabine, and many guillemot too. There is also a large walrus rookery on the sand spit here and, as a result, polar bears.

The cacophony (and the smell!) produced by one million nesting birds is one of the most memorable and, literally, jaw-dropping experiences of the whole trip for many of our guests.

Group does a hike up to the top of Preobrazheniya Island to view the bird cliffs from above. On the way, good chance of seeing polar bears, lemmings, Arctic fox, snowy owls and more.

Sail south to Begichev Island. Here we will see bizarre rock formations on the coast, visit the remains of an abandoned polar research station and have a chance of seeing muskox and reindeer.

From Begichev we will sail south to the mainland, where we will visit Nordvik gulag, formerly the northernmost inhabited place in Eurasia. The prisoners here were digging for salt, which was used to supply Russia’s northern fisheries. The gulag was closed in the 1940s and the settlement around it was abandoned in 1956, but a several buildings and some machinery remain.

Today we head south back in the direction of Khatanga. On the way, we stop to visit camps of Dolgan fishermen and mammoth tusk hunters on the banks of the River Novaya. At this time of year, the migration of Arctic char, some of which can weigh over 30 kg, is passing through this river.

More chances to see reindeer swimming across the river or running on its banks.

Arrival in Khatanga. If we have spare time, we can visit the crafts centre, where local artisans make objects from mammoth tusk, walrus tusk and reindeer antlers. Overnight in guest house.

Group flies from Khatanga to Krasnoyarsk. Overnight in hotel.

Group has a half day to relax and a half-day trip to the famous Krasnoyarsk Pillars National Park. 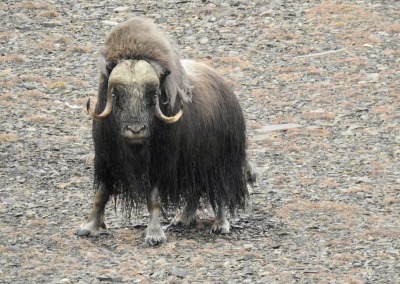 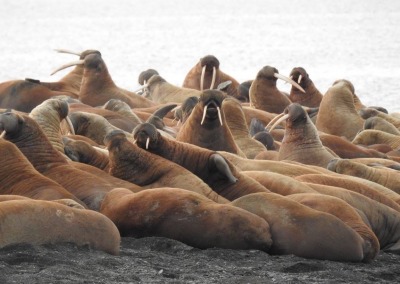 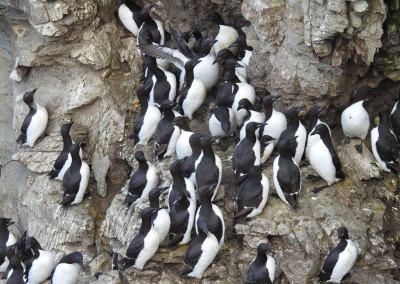 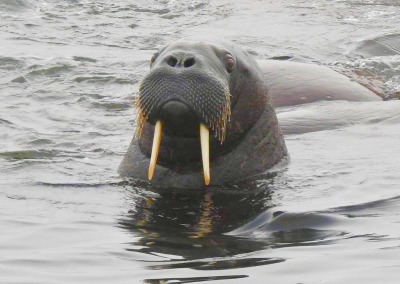 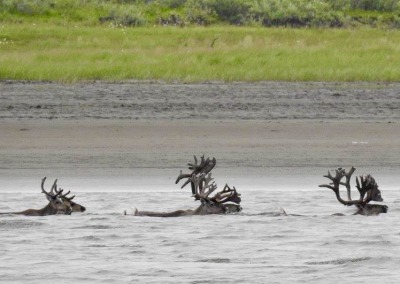 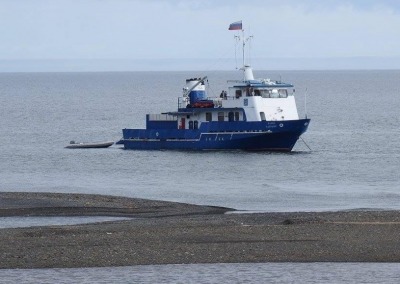 The above itinerary includes rental of the ship for 9 days. However, the rental period can be reduced to 6 days, making the trip cheaper. We will still have time to visit all the places listed on the itinerary, but will not be able to spend so much time searching for animals in each. Please see the prices for different rental periods below.